You are here: Home / Archive / Rise of the ‘nones’ driven by technology — or is it family values?
Print-friendly 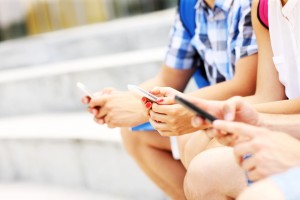 As the rates of the non-affiliated (or “nones”) grow, researchers have been busy seeking the source of this disenchantment with religious institutions and why it seems most prevalent among young people. In a paper presented at the recent meeting of the Society for the Scientific Study of Religion (SSSR) in Newport Beach, Calif., Paul McClure of Baylor University looked at the role that technology, specifically social media, has on religious and spiritual beliefs and finds that the affect is significant. McClure notes that past research has found the rate of religious affiliation drops with increases in Internet use, but he focused closer in on the use of social media such as Facebook, and attitudes toward religious pluralism and syncretism. Based on an analysis of the National Study of Youth and Religion (waves one, three and four), McClure finds that users of social media are more inclined to condone religious syncretism, even among those whose religion forbids such mixing and matching of religious beliefs and practices. Those young adults whose parents are religiously involved and are themselves more active in their faith are more likely to disapprove of such syncretism. McClure speculates that social networking sites encourage a “tinkering” mindset. “On Facebook, there is no expectation that one’s “likes” and preferences be logically consistent and hidebound by tradition…the Facebook effect on religion is that all spiritual options become commodities and resources for which individuals can tailor to meet their individual needs,” he adds.

Another paper, presented at the SSSR meeting by Vern Bengtson, R.D. Hayward and Phillip Zuckerman, questions the role of social media in the rise of the nones and the related spiritual but not religious trend. The researchers argue that many young nones are not so much dropping out of faith communities or even rebelling against their parents’ faith as much as following a family trajectory of religious non-involvement. The researchers note that the nones are diverse; they could be seekers still looking for a congregation, atheists and agnostics, the religiously indifferent, or the “spiritual but not religious.” Using longitudinal data from 1970-2005, they find a sharp increase in non-affiliation by generation. The transmission of non-affiliation was found to be higher than the transmission of Catholics and Protestants in general, but equal to evangelicals. This transmission of none identity is carried out by non-religious grandparents and parents teaching and role-modeling secular values and beliefs. These values are often aligned with sacred texts, but they are non-theistic in nature, according to Bengtson, Hayward and Zuckerman.