You are here: Home / Archive / China and the Vatican keep the dialogue going
Print-friendly 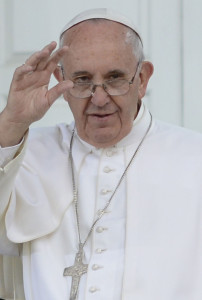 While the negotiations are shrouded in secrecy, Pope Francis recently confirmed that contacts and discussions between the People’s Republic of China and the Holy See continue—and Beijing didn’t deny it, reports Eglise d’Asie news service (Sept. 29). The statement by the pope took place on the flight bringing him back from Philadelphia to Rome. He expressed his hope to be able to visit China some day. Early this year, State Secretary Cardinal Parolin had affirmed that negotiations had reached a “positive stage,” before making more nuanced statements in April about “nothing new” taking place in such meetings. In contrast, observers see little change in China’s religious policy. A document approved by leaders of the Communist Party in April and released in September, contains several articles that deal with religions. It maintains the usual line: religions need to prove their “social usefulness and contribute to efforts of national unification,” while any foreign intrusions in China’s religious life should be prevented.

Yet one should be cautious not to exaggerate events such as the demolition of 1,200 crosses in the coastal province of Zheijiang—where there is a strong Christian presence—over the past two years, writes Xiao Yun (of Open Doors International) in World Watch Monitor (Sept. 22). According to him, the crosses (and some churches) fell victim to a campaign targeting illegal constructions. A number of them had allegedly grossly violated their building permits, even if officials “responsible for the removal of crosses didn’t follow the correct legal protocol either.” Some Christians fear that this could be the early stage of a national campaign, while others claim to find no difference in government attitudes toward them. In Zheijiang itself, no church meetings have been stopped. It remains to be seen if President Xi Jinping will choose a new turn in religious policy. According to some sources, he might chair a high-level Party meeting on religious affairs in October.